I’ve been crazy busy with getting my boys ready for school, my fitness stuff going on, soccer has started for my big boy and whatever else I can shove in there too. 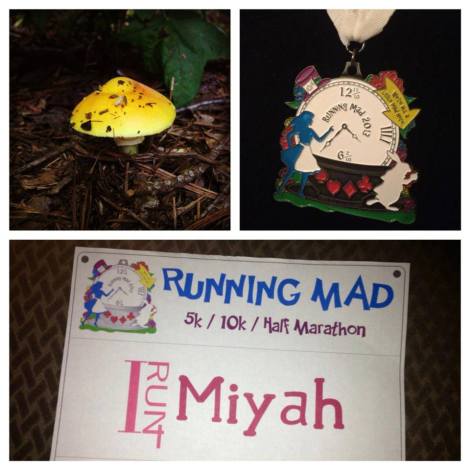 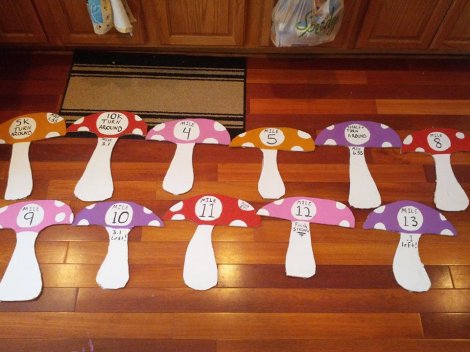 Plan was to run the 5k and start out with my friends that were running the 1/2 marathon so I could try and pick up the pace and see what I can do.

This is a wonderful friend of mine who has had some horrible shoulder pain/surgery/very bad recovery and now she is BACK!!!!!  I missed her!!!  She is a race walker and can walk as fast as I run.  She walked up to me and said “what distance are you doing?” and when I said 5k, she asked “will you do the 10k with me?”  I can’t turn her down!!!  We took it nice and slow and i took walk breaks as needed.  But the two of us (plus another wonderful lady) finished the 10k!!!! 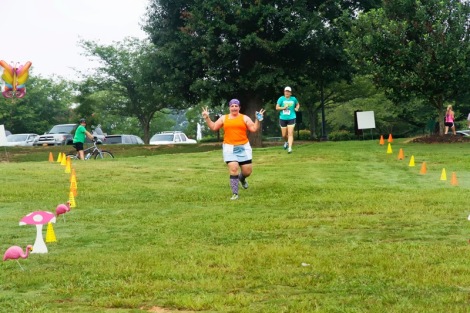 I finished in 1:37 so no records were broken but it was the first 10k I have done since I injured my hip/leg so that was pretty neat.

More pics from the race!!

Several dressed up in costumes!!!

I really wanted to stick around and play 🙂 but I had to race home to finish putting together my little mans birthday party.  Told ya I had a lot going on!!!

I need to take a pic of my bib and medal.  A cool friend printed ours out with our name on them and laminated them 🙂

Followed up on Sunday with a lake swim with several MRTT ladies.  Felt better and had a good time! The weather was great!!  Then 2 of us set out for a short ride so I could start getting used to my new bike seat!

It’s a Specialized Ruby Pro I went to Senoia Cycle Works and had him fit me for a new saddle.  Plus he adjusted my overall fit and ordered me pedal extenders so my knees wouldn’t splay out when I pedal.  I have wide set hips (good birthing hips since i had two boys just fine) and it’s making my knees ache during rides.  The saddle fits everywhere perfectly and what was hurting before, now is not but my sit bones are a little mad.  🙂  have to break in my butt again (though not as bad as when I first started riding).

On Tuesday, I met up early with my butterfly wearing friend for a 3+ mile run.  We had a great time and I only took one short walk break up a hill.  Felt good even though it was humid, the temps felt better which was great.  I headed off to work after I got home and showered.

So one last bike thing before my boys were coming back from Granmommies’ house!!!  I went on the longest bike ride I have ever done.  57 MILES!!!!!!

So you will probably ask, “how did you go that far? especially if that is way past what my longest ride has been?”  Well multiple reasons – 1) it’s on the Silver Comet Trail – flat!!  well mostly, but no where near the elevation changes I deal with on a regular basis 2) I have done stuff endurance wise up to 3 hours and knew I would survive for longer 3) I was tagging along with a friend that needed to take it easy and just make it the distance since she is training for a Half Ironman in a few months and 4) we would take plenty of breaks. 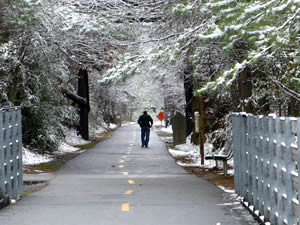 We did not go all the way into Alabama.  We stayed in Cobb and Paulding Counties.  There is only a 2% grade change (minus two sections that have detours b/c they are updating, fixing bridges etc.), it’s tree lined and lots of places to stop and rest including some bathrooms.

We set out at 7:30 am and kept a pretty good constant pace of 13-15 mph.  We had to stop for street crossings, dodge people and such.

Pretty cool to see how far we actually went 🙂  Total ride time 4:21, total time gone 5 hours.  We stopped twice on the way out to fuel.  I brought 6 Huma Gels, 2 protein bars, peanut M&M’s, mixed nuts (stayed in the car) plus two 24 oz water bottles on my bike and my 70 oz camelbak with water and Nuun tablets in all of them. I love this thing!!!  best decision ever (may except for the peanut M&M’s I packed).

Took one gel before we left.  Had 2nd one and M&M’s after 1 hour.  Then we stopped at the turn around point on a bench and chilled out for a bit.  I had 2 gels and M&M’s plus one 24 oz water bottle.  We both felt good except our butts were very sore.  Mine b/c of the new seat, her’s b/c her seat was too high and we didn’t realize it until 30+ miles into this adventure.  I had a multi tool so she was able to adjust it and not make her feel worse but the damage was done.  We felt good and actually sped up in the 40+ mile range.  At 50 miles I hit a wall.  Yeah that wall that runners talk about.  Well I found it on my bike.  At 50 miles I couldn’t pedal, felt terrible and just wanted to be done.  Yet we still had 7 miles to go.  We finally decided to stop and found a perfect place.  There is a cycle shop along the trail with bike racks, picnic tables.  Best decision we could have made.  I had my last gel, rest of the M&M’s, more water and stretched my right leg on the table.  After 10 min or so, my battery on my garmin was starting to die so we decided to set out and hope we can get a full record of what we did.  Her garmin was on swimming in the beginning and didn’t catch the whole trip and she wasn’t sure what her Nike + would record on her phone.  That rest stop was the best, I could pedal again and we cruised along and it wasn’t until we were ~1 mile out that we both started slowing down.  It was a very awesome day!!  I left and drove to my parents house to pick up my boys.  First order of business – ICE BATH!!!  climbed in my parents tub with cold water and dumped in what ice they had.  it wasn’t holy cow cold but good enough to help my exhausted legs.  Then I got in the shower, ate lunch and loaded up my boys.  So somehow I managed to not take any pictures the entire time we were out there.  I know shame on me!!

Sunday morning I was not as sore as I thought I would be, shoulders and arms were from leaning over on my handle bars.  I met my friend for a lake swim.

Beautiful morning and we swam out to the boat house and back and then went half way and back.  Spent over 18 min in the water and felt good.  My OWS are getting better!!  YAY!!!! 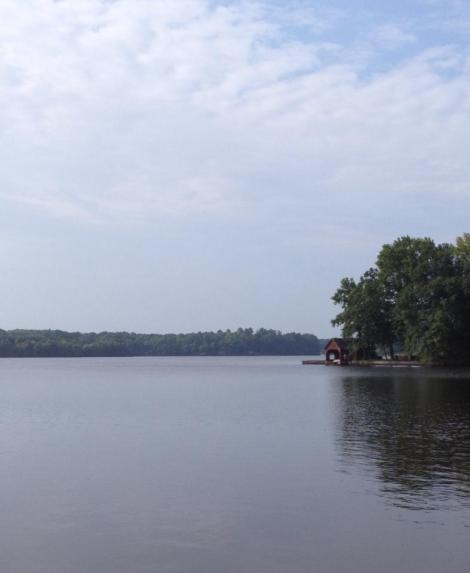 Ok two final things!!! Went for a short bike/run brick with a few new ladies.  We had a good time and just had fun on our bikes for about 40 min.  The run was a different story.  It is super hot, humid and I was still very tired from my long ride on Saturday.  So about half way into the run, i just started walking.  Met up with some ladies that were walking that night (I know them so it wasn’t total strangers) and stayed with them.  It is what it is!!  My boy has a soccer tournament this weekend so I think the only thing I will get in this weekend is a lake swim Sunday morning.  That’s the plan anyway.

So the virtual triathlon that I did a few weeks back (and busted my knee), our medals came in!!!! 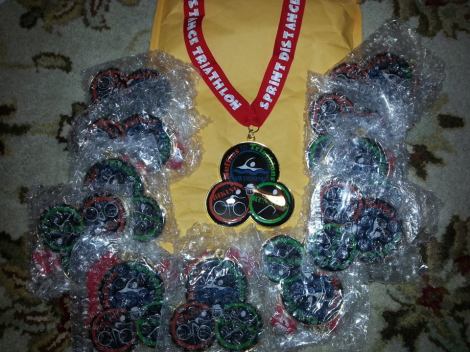 I definitely have to get a medal rack now, got quite a stash.  🙂

So there you go!!! Everything that has been going on.  I have this week and next week and then my tri on Saturday August 17th!!  It’s so close!!!