Sorry didnt’ get back to the computer to post.  I did get a new Iphone 4s yesterday so I was a little busy setting that all up and helping the husband with his (his first smart phone).

Friday I got home from work and then had to get busy getting ready for this weekend.  I had a plan to use wax paper (found a tutorial on pinterest) to iron on to the shirts and then spray with bleach water.  It reveals a negative of the design you cut out of the wax paper.  Well after I spent hours cutting out cut monograms of our last name initials, the wax paper wouldn’t stick to my shirts.  In the trash those went and on to plan B which was to put the saying my baby sister came up with.  I had 3 bleach pens to put family fun run on the back.  Ended up writing on both sides of our shirts.  Got the fronts done but only 1/2 of the backs before I ran out of bleach.  I was not going to the store at midnight on Friday.  I decided to just pick up more pens on my way out of town and would finish them Saturday night at my aunt’s house.  Here they are sitting on my back porch.

Here is what they say: 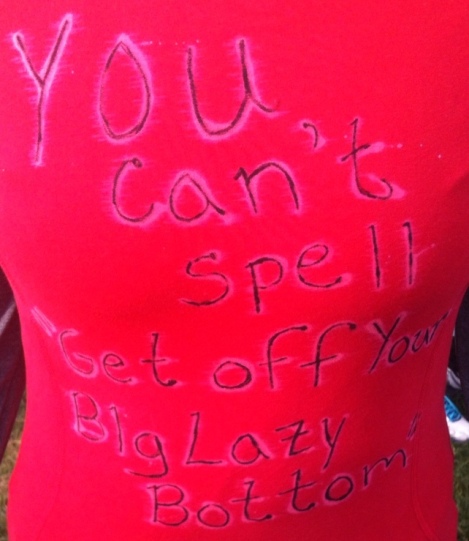 My baby sister and Aunt went and picked up everyone’s race packets so we were set for the big day.  It was chilly but not terrible.  We all layered so that we wouldn’t be cold and should be comfortable. 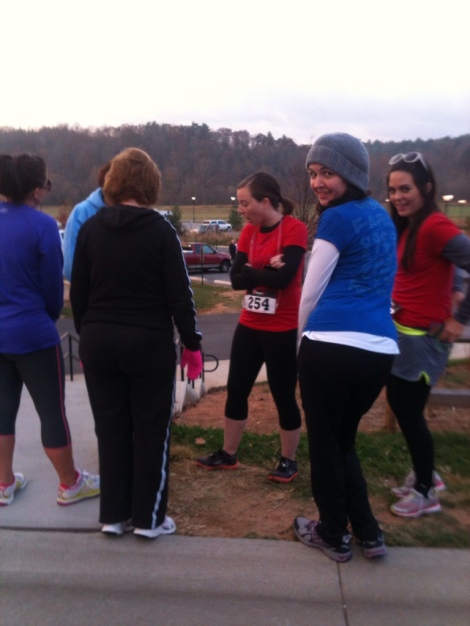 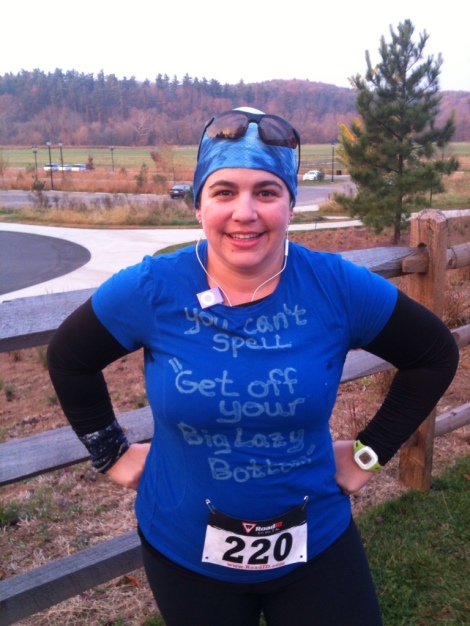 Yes I wore rainbow socks over my running tights.  Actually helps to keep my calves warmer.

Me and my silly sister’s.   My mom hates when we do this, so now we make it a point to always take her a picture just like this!!!

The 5k started at 7:30 and we were all off.  Everyone was running their own race, if we stayed together than great, if not then that was ok too.  My aunt and my cousin’s MIL were walking it.  I set out, started my garmin, and was really curious to see how I would do.  It’s an amazingly flat course for being in the Appalachian Mountains.  I can’t get to the elevation view on this computer but will post it later.  We went up a small hill on our way out but then it was mostly flat with only small incline or downhills.  It was an out and back and we ran along the French Broad river.  Had a wonderful view of the countryside, cows, horses, geese and mountains.  Love my new watch.  First mile was in 10:37 – didn’t think I would see that 🙂  Turned around at a lagoon and a water stop.  I had my handheld so I decided not to stop.  Second mile was in 11:19 but could tell I was starting to slow down.  Tried to speed up a little and then started slowing again so kicked it up a bit.  Also was starting to have the doubt I could run the entire race.  I still haven’t done that yet and I really want too.  But at 2.7 miles, my legs were jello.  Decided to take a quick walk break so I could hopefully finish strong.  Charged ahead and actually got as fast as a 9 min mile until I had to go over the last little hill.  Slowed down as I was coming over but refused to walk and finished strong at 10 min pace.  Third mile was 11:23 even with walking and only a min difference in my pace.  Much better than I’ve been doing.  I got a new PR of 34:13 and cut 2 minutes off my 5k time.  Average pace was 11 min/miles.  Very cool and very proud of myself.

My next goal is to run a 5k without stopping.  I almost did it, so I know I will get there.  After that the next goal is to have a sub 30 min 5k.   Here I am all done and waiting for the rest to finish.  All the sister’s and cousin’s finished in good time and smiling. 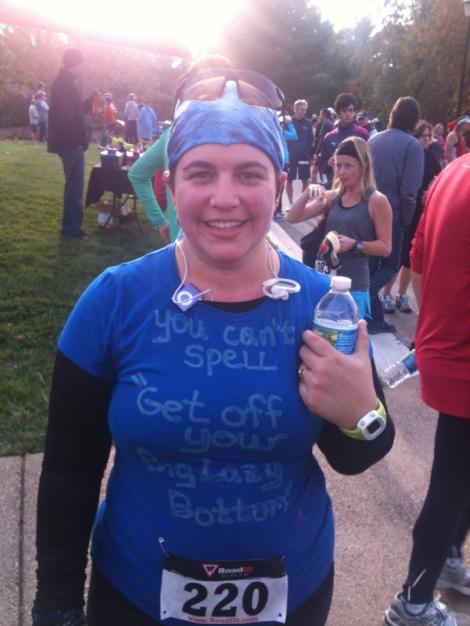 Here is where the awards were held and the start was just up the hill from this.

I wanted a couple more pictures but my phone froze up and then we were just ready to go.  One of my cousin’s had just gotten off the night shift at the hospital so she was ready to go to bed.  I didn’t blame her so we headed back to their house.  Everyone had fun and we are already talking about the next one.

I’ve got a couple runs planned this week on Wednesday night and Saturday morning with my group.  Then on Monday I have my informational meeting about training for my first triathlon.  I’m super excited.