We didn’t have anything planned for the entire weekend.  I knew I was going to get a run in Saturday morning and the boys were getting haircuts.  That was it.  Everything else that we got to do would just be around the house or gravy 🙂  The boys got up early, even early for a weekend, so I actually got out the door around 8 am for a run.  They went to get breakfast and run some errands.  The temperatures were great at 71 F it was just humid and very cloudy.  I headed over to the lake and started my run.  I felt tired but not bad.  I just decided to get miles in and it doesn’t matter how much I run or walk, I did it.  I got rained on a little bit off and on.  So between that and the humidity I was pretty wet by the time I finished.   There was a 5k and 10k going on too so lots of people out for a run.  Also noticed a bunch of people doing brick workouts for the triathlon next weekend. A brick workout is two different workouts back-to-back.  So go swim for 30 min and then go bike for 10 miles.  You don’t have to get massive amounts of time in of each, you just need to get your muscles used to having to change activities.  I saw several people in the lake and a number of people pass me on a bike and then later pass me again running.  Doesn’t help that they were long legged guys that I have no hope in keeping up with since I’m 5’3″ maybe 5’4″ with shoes on.  I got lots of thumbs up, good jobs and good mornings from all the runners.

The boys got haircuts (they were looking a little shaggy) and we ran through publix for a few things.  Then we got a call from a friend asking if we wanted to go to the lake on his boat.  We weren’t going to say no.  So on Sunday we headed out around 10 am and didn’t get back until 6 pm.  We were all tired, happy, and a little sunburned.  The little boys did fine.  My bigger one has some pink cheeks and nose.  The little one is fine.  Me and the hubby are pink on our cheeks and shoulders but not bad.  We got sunscreen on really well the first time and then were really bad at reapplying.  This was my little guy’s first time on a boat and he did great.  My big boy loved swimming around in his life jacket.  Yes were good parents and they wore their jackets the entire time we were on the boat.  The water was nice and cool and the temps and humidity were awesome.

So there was an unofficial plan to maybe go for a family bike ride and I get my kettlebell workout in yesterday.  Yeah that didn’t happen.  We got everyone fed, I ran to the grocery store while hubby got the boys showered and dressed for bed.  Then it was story time and lights out.  I took a shower after I got the boys to bed and then I crashed.  So I will come home today and pick up, get everyone ready for school tomorrow and swing my bell.  Then I will plan on running on Wednesday.  I have a dentist appointment after lunch so if the temps are not horribly hot I can go run outside.

So an update to the picture collage I posted on Friday.  I had a friend tell me I needed to take a picture in the green shirt for comparison too.  So I have updated the collage and made a separate one for just the green shirt.  I know I am not sitting down but you get the point. 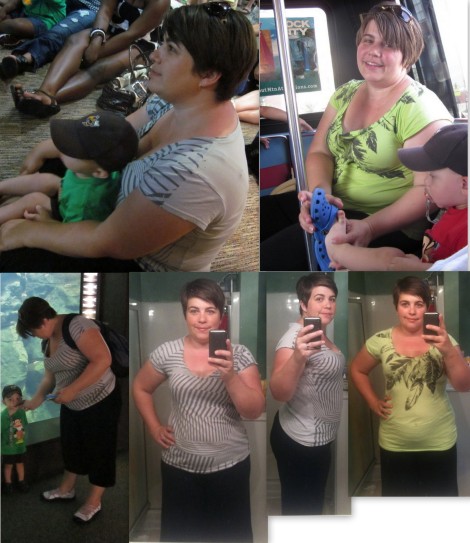 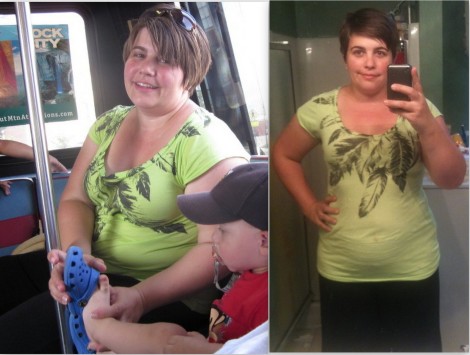